6 days into Christmas and the turkey battle ensued  but we were finally down to the last couple of portions of the 5kg turkey. Other ingredients left over from Christmas day included half a bag of potatoes and a pot of double cream. Being a big fan of dauphinoise potatoes I decided to use this as a base for the final turkey throw down.

First of all my sous-chef (aka Mr Foodwaste) par-boiled 4 potatoes for 10 mins and left to cool. Whilst they were boiling I fried up an onion for a couple of minutes in a large saucepan before adding the last pieces of turkey. After a couple of minutes I added a good glug of white wine (a half open bottle that shock-horror, we’d somehow failed to finish). This was simmered at a high heat until it had reduced slightly before the leftover cream was added (I probably had about 200ml left). I also added in some chicken stock to ensure all that all the turkey mix was covered and to slightly thin out the creaminess. For a bit of extra flavour I threw in some leftover thyme.

After bringing the mixture to a boil and simmering for 5 or so minutes I added the leftover cranberries and simmered for a further 5 minutes before seasoning to taste. The sauce was incredibly rich and the cranberries quite bitter so I was a little concerned about how the dish would turn out.

Using a large casserole dish I thinly sliced potatoes and layered on the bottom of the dish before adding a layer of the turkey mix. I continued the layering until all the turkey mix was used up, finishing with a layer of potatoes. For extra creamy goodness I’d recommend saving some of the liquid from the turkey mix and pouring over the bake which will then filter down through all the layers.

For an extra bit of fatness I topped the bake with a few small slices of camembert cheese before placing in  the oven (200c) for 40 minutes by which point the bake had turned a beautiful golden brown.

The oven baking seemed to have taken away some off the richness from the initial mix and the bitterness of the cranberries had reduced as well. All in all the dish was a very calorific winner, so much of a winner that Mr. Foodwaste couldn’t wait to tuck in, leaving me with a picture of a half eaten dish. 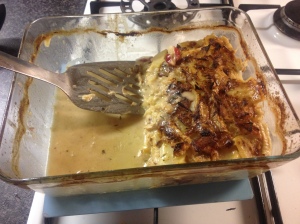